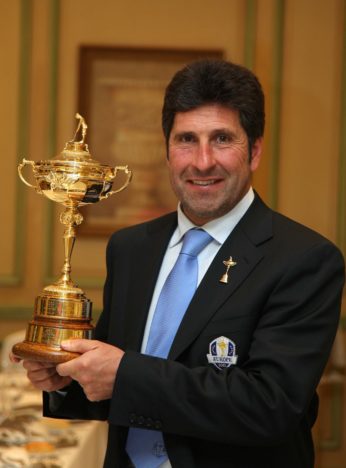 One of the most successful amateurs in the history of the game – he won the British Amateur, Youths and Boys Championship titles – José María Olazábal finished first at the 1985 European Tour Qualifying School and went on in his debut season in 1986 to win twice, finish second on the order of merit (behind Severiano Ballesteros) and become the first Spaniard to be chosen Sir Henry Cotton Rookie of the Year. Since then, in spite of injury troubles that have threatened to bring a premature end to his career, he has won tournaments in Europe, the US and Japan, including two US Masters titles (1994 and 1999), combined with Ballesteros to form the Ryder Cup’s most successful partnership (they won 11, halved two and lost only two of their 15 matches together) and in 2009 became the second Spaniard after Seve to be inducted into the World Golf Hall of Fame. In January 2011 he was named captain of Europe’s 2012 Ryder Cup team.