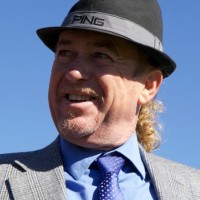 Oldest European Tour champion, sublime US Masters performance, sparkling senior tour debut&hellip; Miguel Ángel Jim&eacute;nez, now arguably the third member of a global trio of Málaga favourite sons (together with Pablo Picasso and Antonio Banderas), just keeps dazzling us. So how does the “world&rsquo;s most interesting golfer&rdquo; do it? “If you are 50 it doesn&rsquo;t mean that you cannot play well. I&rsquo;m still moving. I&rsquo;m still flexible.&rdquo; Cue to&hellip; his endearingly particular stretching and warm-up routine, captured for posterity on YouTube. 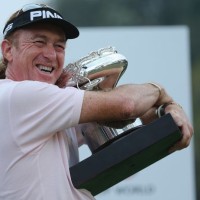 These are the salient facts&hellip;

&bull; He was fourth in the 2014 US Masters at 50 years of age (Jimenez became eligible for the “round-belly&rdquo; ranks on 5 January), the second-best performance by a player in his fifties at Augusta after Sam Snead (joint third in 1963).

&bull; One week later he was a winner on his Champions Tour debut, in the Greater Gwinnett Championship, only the third player to achieve that feat leading wire-to-wire (the second was in 1999). 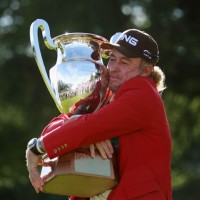 &bull; Totalling 14-under over the 54 holes, he carded 15 birdies, one eagle, and just one bogey and one double bogey (on the third and fourth holes, respectively, in the second round): i.e. covering his last 32 holes without recording a single over-par score.

&bull; He is just the second golfer from Spain to win on the Champions Tour: Jos&eacute; Mar&iacute;a Ca&ntilde;izares took nine play-off holes to secure the 2001 Toshiba Classic title.

&bull; He became the first player to win a European Tour and Champions Tour event in the same season.

&bull; Thirteen of his 20 European Tour victories have come after he turned 40. When Jim&eacute;nez was victorious in the Hong Kong Open in December 2013, he extended his record (set in the same event the previous year) as the oldest winner on the European Tour.

So where to next? Jim&eacute;nez has a one-year exemption for the Champions Tour but he is reluctant to make a firm commitment. “To me it&rsquo;s not about money,&rdquo; he said after his victory in Georgia. “It&rsquo;s about some different goals to make me feel proud of myself. To me I would feel nice to play on the Ryder Cup once more.&rdquo;

If Jim&eacute;nez does qualify to play in the Ryder Cup on points, or if Paul McGinley makes him a captain&rsquo;s pick in September, he will become the oldest member of the European side in the history of the event. Ted Ray was 50 years, two months and five days old at the inaugural contest in 1927. The Spaniard has played in the Ryder Cup four times: twice on the winning side and twice among the losers. His record is mediocre (4-8-3) and he is keen to improve it.

Jim&eacute;nez shot a blemish-free opening 65 (seven-under) to lead by three strokes on his Champions Tour debut. “Very good start,&rdquo; he said later. “Now it&rsquo;s time for a nice, warm shower, a nice fat cigar and a glass of Rioja&hellip; I&rsquo;m desperate to find one of my cigars and have a glass of wine.&rdquo; Bernhard Langer had set the previous tournament record with a 66 while winning the 2013 inaugural championship. 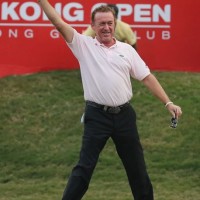 “We need guys like that out here. I mean, he&rsquo;s a huge fan favourite. He brings a lot of flair and class to golf and he just has a good time.&rdquo;

During the conference, Perry noticed the Spaniard trying to sneak through the interview room and called out, “Hope to see you tomorrow. Don&rsquo;t beat us too bad, okay?&rdquo; Jim&eacute;nez replied something about wine and cigars, prompting Perry to lament, “That guy has too much fun.&rdquo;

Jim&eacute;nez&rsquo;s playing partners in the last round of the Greater Gwinnett were two former US Masters champions who also had excellent results at Augusta this year: Fred Couples (the Champion Tour&rsquo;s most popular attraction &ndash; at least until now!) and Bernhard Langer (its best current player). The American finished five shots behind the winner, and the German was second, two strokes back.

More celebrations in May

“I showed my game is in very good shape,&rdquo; said Jim&eacute;nez. “I&rsquo;m very happy with my age and the way I&rsquo;m doing things. The last 15 years have been the best years of my career. It&rsquo;s nice &ndash; I&rsquo;ve got no complaints with being 50.&rdquo;

The week before at Augusta he was just as upbeat, in spite of the disappointment of not winning his first major. “The main thing is enjoy yourself, enjoy what you are doing and smile. Not enough people smile on the golf course. I love what I&rsquo;m doing, and I hope I&rsquo;m still in the same conditions for another 25 (years). I&rsquo;m not going to get bored of myself.&rdquo;

The next time Jim&eacute;nez is due to tee up is the Spanish Open at PGA Catalunya in Girona from 15 to 18 May.

In the meantime, he will be marrying his Austrian fianc&eacute;, Susanne Styblo, on 3 May in Vienna; and he plans to make his European Senior Tour debut in the Senior British Open Championship at Royal Porthcawl in July.

The post Greater Things&hellip; a Master Class appeared first on Oz in Spain.