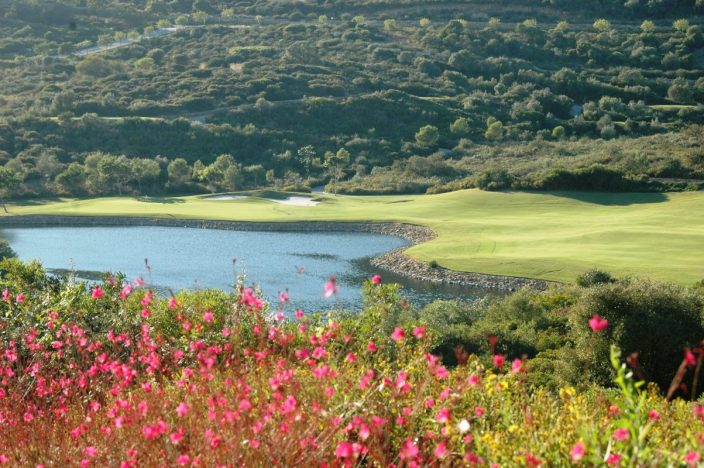 Finca Cortesín has officially unveiled a new opening hole at the Casares course as the 365-day countdown to next year’s Solheim Cup begins. Announcing the change to the course – part of a general revamp and upgrade overseen by original designer Cabell B. Robinson – the tournament organisers said, “The ambience on the first hole of the Solheim Cup is unlike any other golf tournament. The atmosphere and the decibels created by the European and American fans with their chants, music and colours mean that at that moment, the spectacle is turned from the golfers to the stands.”

With this in mind, the three parties involved in the organisation of the event (Ladies European Tour, Deporte & Business and Finca Cortesin) agreed that the first hole of the 2023 Solheim Cup should be “a place where a large number of people could gather and at the same time be a challenge for the golfers”.To that end, the new first hole is now a 256-metre par-4, with a large lake on the left side that reaches the front of the green, a narrow, well-protected fairway, and a large but lively green.

Both European captain Suzann Pettersen and her American counterpart Stacy Lewis have had an opportunity to check out the new hole.

“The sensations you experience,” said Pettersen, “have nothing to do with other moments you can experience in golf, like leading a major, because in this tournament you don’t just play for yourself, you do it for your teammates, for your team. you put all your heart into it and you want to give your best. That first tee of the Solheim Cup is all adrenaline and energy.”

Added Stacy Lewis, “I don’t think we’ve ever had a first hole like this in the Solheim Cup. You can reach the green but the water comes into play quite a lot. It’s like an amphitheatre. The stands are going to be high up, practically above you, which will make the public feel very close. It’s definitely a great hole for the Solheim Cup.”

Meanwhile. he Costa del Sol hosted a multi-faceted all-day event to mark the fact that there are only 365 days to go until the world’s premier professional women’s team golf competition is held in Spain for the first time (22-24 September).

The “One Year To Go” celebrations included a gathering on the Puerto Banús (Marbella) dyke of 365 children from different golf academies in Andalucía where, in unison, they completed the “Longest Swing” – hitting an approach shot into the sea with totally biodegradable balls. Earlier, a special presentation was held in Benahavís, and an exhibition match at Finca Cortesín to inaugurate the new first hole.