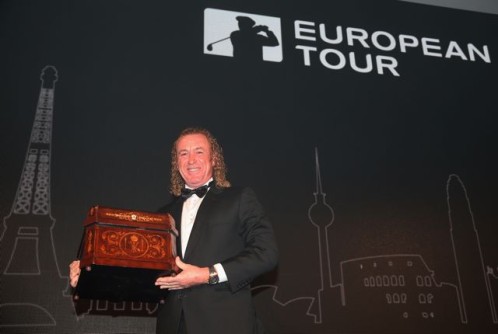 Barely five months ago, Miguel Ángel Jim&eacute;nez was laid up in a hospital bed recovering from an operation to his tibia, which he had broken in a skiing accident in Sierra Nevada. Now, in just his second tournament appearance since putting the crutches aside (he missed the cut in the Spanish Open in El Saler in April), the European Tour&rsquo;s oldest winner produced a remarkable performance to close birdie-eagle at the daunting Wentworth course and finish joint fourth (with overnight leader Alejandro Ca&ntilde;izares) in the flagship BMW PGA Championship.

It was the Málaga-born star&rsquo;s 600th Tour appearance &ndash; joining Sam Torrance (706), Barry Lane (682), Roger Chapman (619), Eamonn Darcy (610) and Malcolm McKenzie (605) in that select group &ndash; an achievement that was officially recognised on the eve of the tournament with a special presentation by chief executive George O&rsquo;Grady and tournament chairman Thomas Bj&ouml;rn: a tantalus decanter containing a 600-year-old whisky

“It&rsquo;s been an amazing journey,&rdquo; said Jim&eacute;nez, during the presentation at the Players&rsquo; Awards dinner. “The game has given me an amazing life and amazing experiences and I have enjoyed almost every minute of it. I have had some special victories and experiences and it is difficult to pick out one highlight.

“This year is my 25th year in a row on the European Tour and I have seen so much change, and so many players. I think I have survived four generations on the Tour. When I started I was playing with Seve, with Lyle and Woosnam and all those players. Then came Olazábal, Faldo and Monty and their generation. Then you had Clarke and Westwood, guys like that. And now when I go on Tour they are kids. Rory and all of the these young boys are children!&rdquo;

The post Vintage Feat appeared first on Oz in Spain.