Jon Rahm has always talked about how much of an influence Seve Ballesteros was on his career. From attending the 2007 Volvo Masters with his father at Valderrama (where Seve had captained Europe to victory in the 1997 Ryder Cup) as an awestruck 12-year-old to becoming European number one in November 2019… a feat only previously achieved by one Spanish golfer (Seve). And now he has once more emulated the legendary Spaniard by reaching the top of the world rankings. Again, neither José María Olazábal nor Sergio García (both US Masters champions) before him have achieved that.

Rahm is 25 years old (born in Barrika, Basque Country, on 10 November 1994); Seve had just turned 29 when he reached world number one in April 1986, and he went on to hold the top spot for 61 weeks in total. Rahm – a graduate of Arizona State University – was also the top-ranked amateur in the world during two separate periods starting in April 2015 (for a record 60 weeks in all). Seve followed a different path into the paid ranks, turning pro in March 1974 at the age of 16.

Of course, Rahm made sure he had to do it the hard – and spectacular – way, a la Seve. He entered the final round of the Memorial Tournament – Jack Nicklaus’s prestigious event at Muirfield Village in Ohio – four strokes ahead of the field.

During a roller-coaster last day ride, he had extended that to eight shots at the turn after two birdies, but then things began to unravel – with bogeys on the 10, 14th and 16th and a double on the 11th. He actually thought he had holed a magnificent chip on the 16th for a birdie, but after the round officials advised him that his ball had inadvertently moved as he addressed it (imperceptibly to the human eye but picked up on slow-motion, high-definition video) and he was penalised two strokes. That still left him with a three-over 75, a nine-over total of 279 and a three-stroke victory over runner-up and close friend Ryan Palmer (they had paired for victory in the 2019 Zurich Classic),

And that meant he overtook Rory McIlroy (who finished 32nd) at the summit of the world rankings – the 24th player to be crowned number one. 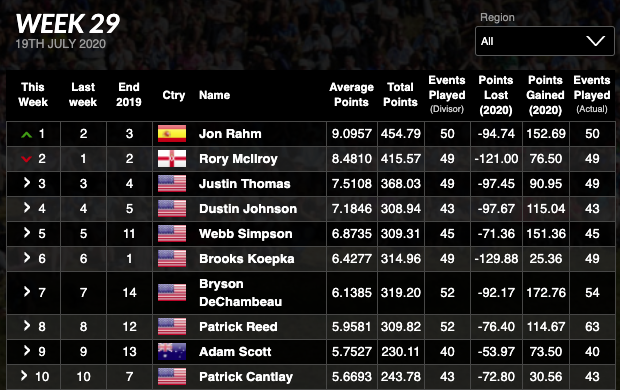 Later, he said, “I don’t know how to describe it. It’s been a goal since I was 13, 14 years old. I remember I heard a story on the radio from my swing coach back in Spain, Eduardo Celles. We were driving somewhere and he asked me what my goals were and my ambitions and this and that, and I remember telling him, I think 13 or 14 years old, it’s like, I’m going to be the best player in the world, and that’s what I set out to be. It’s pretty surreal to think it’s happened this quickly, right, in less than 10 years. I mean, how many people get to achieve a lifelong team, a short lifelong dream, in their mid-20s? It’s incredible.

“To be a Spaniard, the second Spaniard to ever do it, given there’s not many Europeans that have gotten to this spot, it’s a pretty unique feeling, so I’m going to enjoy it for a while.”

As for the penalty shots, he said, “I want everybody to hear it: It did move. It is a penalty. As hard it is to say for how great of a shot it was – as hard as it is to say that, I won’t finish double digits under par. But it did move, so I’ll accept the penalty, and it still doesn’t change the outcome of the tournament.”

He was also fully aware of the bigger current picture. “I have lost two family members to this pandemic, not for the virus, but the toll that it takes mentally for those people to be quarantined and just having to deal with the situation. And one of them was my grandma, the woman who next to my parents helped raise me. She passed away actually Wednesday of Travelers, and then yesterday is when they took her ashes to her family rest spot in Madrid. So emotional, you know. The other person was my mom’s aunt.

“It goes to show there’s more important things in life than me accomplishing what I accomplished today. We’re going through a pandemic. People are dying for whatever reason it is, and whether you believe it or not, it’s going to happen physically or mentally – it could happen to me, and still does sometimes.