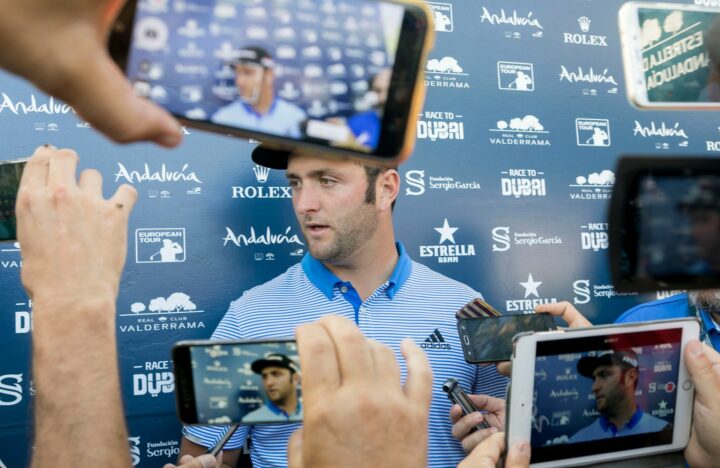 Highly-Competitive Spanish Star with a Finely-Tuned Sense of Karma

Jon Rahm and a goldfish might not seem to have a great deal in common. And in fact they don’t, except for one trait.

After just missing out on making the play-off in the first event of the 2021 FedEx Cup Finals, Rahm bounced back with an opening 64 in the second leg the following week. Later, explaining to a bemused press why he had been able to immediately put the disappointment behind him, he referred to a popular American TV series, Ted Lasso.

In one of the first episodes of the show, which is about an American football coach who changes codes to manage a European football (soccer) club, Lasso suggests one of his struggling players think of himself as a goldfish. They are, he explains, one of the happiest animals on earth “because they only have a 10-second memory”.

“I must say,” said Rahm, “for all those ‘Ted Lasso’ fans out there, be a goldfish. If you haven’t seen the show, you’ve just got to check it out. Played great golf last week, just a couple bad swings down the stretch, and that’s the most important thing to remember.”

The observation would have surprised many observers, as Rahm had gained a reputation for having something of a fiery temperament in his first years as a pro. In reality, however, it had been more a case of wearing his fiercely competitive passion on his sleeve – much in the mode of Spain’s greatest (so far, at least) player, Severiano Ballesteros.

Over the course of 2021, fans were able to view a more mellow side to Rahm after, in December 2019, he married his university-era girlfriend (Kelley Cahill), then, on the eve of the 2021 U.S. Masters, they welcomed their first child (Kepa).

This newly reflective and philosophical persona was especially evident after Rahm was forced to pull out of the prestigious 2021 Memorial Tournament while holding a seemingly impregnable six-stroke lead after the third round, when he was diagnosed with COVID-19.

Shrugging off the setback, two weeks later he became the first Spanish golfer to win the U.S. Open, his first major championship title. Nevertheless, his patience was further tested as he prepared for the Tokyo Olympics following the British Open, when another totally unexpected positive result cost him the chance of competing in the golf event and winning a medal for Spain.

Subsequently, he gained some bitter-sweet consolation when, together with Sergio García, he was the mainstay of Europe’s otherwise catastrophic 2021 Ryder Cup campaign.

At the end of the 2021 season, Rahm was named the U.S. PGA of America’s player of the year, won the Vardon Trophy for lowest adjusted scoring average on the PGA Tour, and topped the Tour money list – another first for a Spanish golfer.

Wise and Successful Beyond His Years

In 2007, when his father took him to Royal Valderrama Club to follow the Volvo Masters action in person, Jon had been playing golf for three years. His first contact with the sport was at Club Deportivo Martiartu, and subsequently he was coached at Club de Golf Larrabea. Ten years later, while we were sorting through our archives, we were surprised to find this image of a 13-year-old seeking autographs at the tournament. The face seemed familiar, and this turned out to be the beginning of a wonderful story and a gift for Jon. He told us that the Valderrama experience had been a significant additional motivation in his career.

“I remember my first visit to Valderrama with my father during the 2007 Volvo Masters. The first player we saw was Thomas Björn on the seventh. Then we went to the first to watch (Ian) Poulter and Sergio (García) tee off. We followed Poulter, who played a great shot on the first. I went ahead of my dad and was lucky enough to see Justin Rose ace the third, but my dad didn’t see it. We followed Poulter along the fourth and we waited for Colin Montgomerie on the fifth. The next thing I remember is the 17th, a great hole. You need a perfect drive to a tight fairway and then you are facing a daunting second – it reminds me slightly of the 15th at Augusta.”

Jon attended Arizona State University on a golf scholarship and, while learning English almost from scratch and earning a bachelor of arts degree in communications, he won both the 2015 and 2016 Ben Hogan Awards for best college golf player in the U.S., was the leading individual at the 2014 Eisenhower Trophy, and finished joint fifth in the 2015 Phoenix Open on the PGA Tour as an amateur during his junior year. In April 2015, Rahm rose to number one spot in the World Amateur Golf Ranking, eventually setting the record for most weeks at the top (60 – during two separate stints).

He turned pro after the 2016 U.S Open, was equal third on his professional debut and quickly earned enough points as a non-member to secure his Tour card for 2017.

He only had to wait until late January 2017 for his maiden PGA title, the Farmers Insurance Open, and in July that same year he achieved his European Tour breakthrough with victory in the Irish Open.

Rahm won the 2019 Race to Dubai, thus becoming the first Spaniard since Seve Ballesteros in 1991 to finish the season as European Tour number one; and in July 2020 victory in the Memorial Tournament elevated him for the first time to top spot in the Official World Golf Ranking – again emulating Seve’s until then unique achievement for Spanish golf.