“I didn’t bring home any balls, hats or gloves, only my shirt with six signatures on it.”

New Spanish sensation Jon Rahm will be making his first professional appearance in Spain at the third edition of the Andalucía Valderrama Masters, Hosted by the Sergio García Foundation.

In an interview for the European Tour website, Rahm who was born in Barrika (Basque Country) on 10 November 1994, said:

“I really look forward to playing in front of the Spanish fans. Right after the Irish Open (which he won for his first European Tour victory) I went to Valderrama to practise for October. I felt a big sense of anticipation as I teed up on the first hole. I wish to encourage everyone to come and support us and watch some great golf. If the public enjoys it, we will enjoy it.”

“My first round at Valderrama was five years ago when I played the Sotogrande Cup with the Spanish national team. It was a different experience because my game has changed a lot since then. I remember playing in a gale.Valderrama is one of the best layouts I have ever played. It is visually attractive and wonderfully maintained. Golf courses don’t need to measure 10,000 metres to be challenging. I find Valderrama very exciting and a good test. You really have to think your way through and play all kinds of shots. Mistakes can be costly, so it keeps you on your toes.”

Rahm was two when Valderrama staged the Ryder Cup. His father Edorta recalls how the 1997 showdown introduced golf to his family.

“We are a group of friends from Bilbao who enjoy a lot of sports together, particularly skiing. Two of our gang were invited to the ’97 Ryder Cup. They had no idea of golf, but they returned home full of enthusiasm. Two years later, Eduardo Celles opened his golf academy in Bilbao and we all started taking lessons. My wife Ángela and our sons Jon and Eriz took up golf in 2003.”

The family became so addicted to golf that they took a week’s vacation every year to go to Valderrama for the Volvo Masters. Jon Rahm has vivid childhood memories of those tournaments where the trophies he collected on the course were the autographs of his idols.

“I remember my first visit with my father during the 2007 Volvo Masters. The first player we saw was Thomas Björn on the seventh. Then we went to the first to watch (Ian) Poulter and Sergio (García) tee off. We followed Poulter who played a great shot on the first. I went ahead of my dad and was lucky enough to see Justin Rose ace the third, but my dad didn’t see it. We followed Poulter along the fourth and we waited for Colin Montgomerie on the fifth. The next thing I remember is the 17th, a great hole. You need a perfect drive to a tight fairway and then you are facing a daunting second – it reminds me slightly of the 15th at Augusta.

On the 18 green I got my shirt signed by Nick Dougherty, Paul Casey and Miguel Ángel (Jiménez), but I don’t think he remembers. (Padraig) Harrington had won the Open Championship that year and I asked him for his cap but he couldn’t give it to me. I didn’t bring home any balls, hats or gloves, only my shirt with six signatures on it. We went from there to the putting green and to the driving range to see some more golf.”

Rahm now returns to Valderrama as one of the world’s top players. “In October I will be proud to play my first professional event in Spain. I look forward to playing the Andalucía Valderrama Masters in front of my home crowd and will do my best to give a good show.”

“The boy that went to Valderrama in 2007 is still there, with the same dreams and the same ambition. I am extremely fortunate that my dreams are coming true, but this year feels more like a Steven Spielberg film – winning at Torrey Pines and again in Ireland the way I did doesn’t even happen in the wildest dreams.” 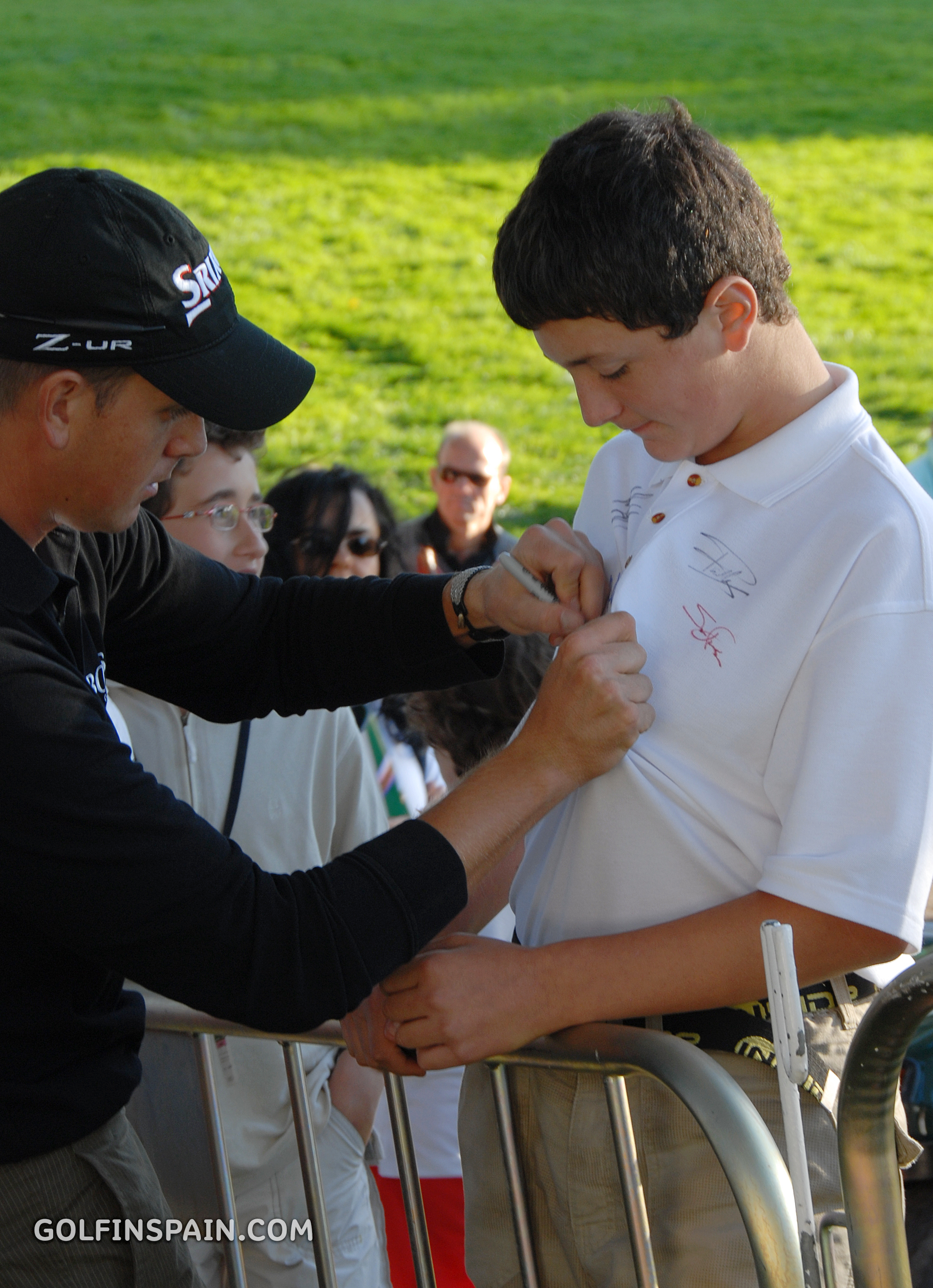 Rahm will be returning to Valderrama in a few days… “All the family will be there, friends and my local club back home. We are really looking forward to the trip.”

This time it will be 22-year-old Jon who is signing autographs. Who knows – perhaps in 10 years time one of those youngsters will be emulating his great feat.

Remember we have some exclusive packages to attend the Andalucía Valderrama Masters at irresistible prices and you can also use our promotional code “GolfinSpain” to obtain a 5% discount on tickets. If you are a member of the Spanish Federation, your ticket can have additional savings. Check the RFEG site.