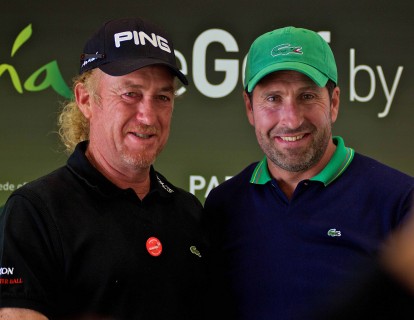 THEY WERE CHATTING at the Dubai Desert Classic in February when Miguel Ángel Jiménez popped the question to Tiger Woods: would he like to come and play in the Open de Andalucía on the Costa del Sol?“I told him that I organised the tournament and I didn’t have much money to spare, but he was welcome to play,” recalled Jiménez on the eve of the 10th edition of the tournament – held for a second year at the Parador Málaga Golf (24-27 March). “I couldn’t pay him an appearance fee, or fuel for his plane, but good food and good wine, yes… We laughed and he said, ‘I’ll think about it.'”

If Woods did think about it seriously there would been have the thorny issue of $3 million (his reputed fee for “international” appearances). In any event, Woods is teeing up in the $6 million Arnold Palmer Invitational in Florida this week, together with most of Europe’s elite players – already setting up camp in the US in preparation for the Masters at Augusta.

As Jiménez freely admits, the €1 million Open de Andalucía is one of the “lesser” events on the European Tour – though he has managed to bring together a strong field. South African Louis Oosthuizen, whose victory last year at the Parador was his first Tour triumph and who went on to dominate the 2010 British Open, was planning to defend his title but earlier in the week he had to withdraw suffering from an ongoing eye infection.

Apart from prizemoney, the players are also competing for two places in the Volvo World Match Play Championship at Finca Cortesín (Mystery Solved) from 19 to 22 May – for the winner and runner-up.

This is the 10th edition of the tournament. Vijay Singh won the first Turespaña Masters-Open de Andalucía in 1992 at the Parador (Spain’s fourth oldest course, opened in 1925); Andrew Oldcorn, Carl Mason and Alex Cejka won the subsequent editions at Novo Sancti Petri, Montecastillo and Islantilla, respectively; and Jiménez (Ferrari Golfing Class) broke the course record with a third-round 63 on the way to victory in 1999.

Turespaña – Spain’s national tourism promotion authority – then switched its sponsorship to other areas of Spain, and the Open de Andalucía remained off the schedule until 2007 when Jimenez’s Fade and Draw Target company resurrected the event. Lee Westwood won that year at Marbella’s Aloha, Thomas Levet was victorious the following year at the same club and Søren Kjeldsen won when the tournament moved to Sevilla in 2009.

Rather bizarrely, for an event heavily sponsored by the Junta de Andalucía (regional government) to promote the region, especially during a year when tourists planning to holiday in the troubled Middle East are expected to opt for safer options such as Spain, Turkish Airlines has been brought on board as a title sponsor (Open de Andalucía de Golf by Turkish Airlines). But these are crisis times. As Jiménez himself revealed, “I even had to dip into my own pocket.”

He did stress, however, “I remain committed to maintaining the Open de Andalucía, even though it is taking a lot of hard work. I’m here and who I am thanks to golf, and this is my way of returning to the place of my birth a part of what I have achieved in 23 seasons on the European Tour.

“Golf in this part of Andalucía is a lot more than sport. It has become an industry and, even though it is currently experiencing difficult times, like the general economy throughout the world, golf generates a lot of jobs here and supports many families.”

“Last year we decided to hold it at Parador Málaga Golf, where they really turned on the hospitality and treated us magnificently, and that’s why we are returning for a second consecutive year.”

Recalling the previous edition, he said the players had “left delighted, not only because of the treatment they received but also because of the course. Several key renovations were carried out at Parador Málaga Golf and the layout was in very good condition. We reduced it to a par-70, but only for the tournament; we reduced the first and 16th holes to par-fours to make the course more competitive. People are sometimes afraid of par-70 courses but it shouldn’t be like that. Some of the top courses hosting Grand Slam events are par-71 or par-71.”

Jiménez also expressed his appreciation to the regional Ministry of Tourism and Sport, “and in particular Luciano Alonso, the minister, for his support of the tournament. I would also like to express my appreciation to all the staff at the Parador, headed by Victor Teodosio. They work hard to take care of our requests and are always on hand to look after the needs of the players and the European Tour.”

As for his own season so far, he said that overall his results from the first four tournaments had been good. “I feel in a good state physically and mentally and I’m hitting the ball well. I nearly won the Volvo Golf Champions in Bahrain; it was a shame my putts wouldn’t go down but I was hitting the ball sensationally, and I fell just one short of Casey (the eventual winner). I became quite frustrated; I had so many birdie opportunities and there was no way of finishing them off.”

Looking back on his career, he said, “I’m 47 now and I’ve been on the European Tour for 23 years; I’m still keen and I still have a hunger for competition. My objective remains the same as always: enjoy what I’m doing and, above all else, live and enjoy the moment.”

Hopefully for him that moment will be a little sweeter this year; he has struggled to balance his roles as promoter and player over the past four editions, finishing 24th, 19th and 14th, and 55th last year.