Nevertheless, even taking into account the increase during 2001, Spain remained in 15th place in the international ranking of officially registered golfers at the end of the year. US led the way with more than 25 million and Japan was next with just over 20 million, followed a long way back by Canada (5.2 million), Australia (1.9 million) and the United Kingdom (1.2 million). Also above Spain – in Europe – were Sweden, Germany, France and Ireland.

In number of golf courses, Spain was 13th with 250. Again, the US led the way with nearly 17,000, followed by the United Kingdom and Japan (both over 2,000), and Canada and Australia (each with more than 1,000). Italy joined Germany, France, Sweden and Ireland with more courses than Spain.

On the eve of the Spanish PGA at Torrequebrada (Málaga) in 1988, a press conference was arranged with the star attraction, Severiano Ballesteros. As the hour arrived, just one journalist was present (yours truly), together with the press officer. Several minutes passed, and two Spanish journalists meandered sheepishly into an almost-empty room. Several more minutes transpired, no-one else arrived, chairs were shuffled and the press conference was hastily converted into an informal chat among the five.

Such a scene at golf tournaments in Spain (even major events) was commonplace at the time. Ballesteros was idolised on fairways throughout the world (he had already won two British Opens and two US Masters), but at home golf was derided as an elite sport and his extraordinary accomplishments went essentially unrecognised.

Over the following decade, prejudices about golf receded (even socialist politicians were caught enjoying the game), Spanish golfers made the most significant contribution to European success in the Ryder Cup, José María Olazabal also won two Masters titles and Spain became the first country outside Britain and the US to host a Ryder Cup (Valderrama 1997). Then along came Sergio García, who at one stage seemed to be a serious rival to Tiger Woods’ hegemony.

Today, more than 200,000 golfers are officially registered with the Real Federación Española de Golf (four-fold the figure a decade ago) and Spain is recognised as the premier golf destination on the Continent.

But that is only half the story. While the men have made massive strides, the women are still struggling to survive, and attract negligible media coverage.

When Raquel Carriedo, a 30-year-old from Zaragoza, in 2000 became the first Spaniard to gain a place on Europe’s Solheim Cup team against the Americans – 21 years after Severiano Ballesteros made his debut in the Ryder Cup – media interest was almost non-existent.

“Women’s golf hardly gets a mention in Spain,” says Carriedo. “We got little coverage from the Solheim Cup.”

All of which is a little surprising, because the Marbella Ladies Open at Los Naranjos (also in 1988) attracted large galleries; and – unlike at some clubs in Britain, for example – female aficionados in Spain suffer only rare discrimination with tee times, etc.

Carriedo went on to finish sixth in the 2000 Ladies European Tour order of merit, winning a total of just over 16 million pesetas. Olazabal, the leading Spaniard on the men’s tour (ninth), won nearly 200 million pesetas.

Women’s golf continued to remain an after-thought in Spanish newspaper columns at the start of this year, not helped by the fact that the country was unable to snare one of 20 events in 14 countries on this year’s LET schedule. But then Carriedo made a significant breakthrough.

Two weeks after José María Cañizares won his first US Senior Tour title, Raquel Carriedo also ended a frustrating run of four runner-up finishes during the past two seasons to win the Taiwan Open (co-sanctioned with the Asian Tour).

One week later, a bogey on the 18th at Sun City (South Africa) denied Carriedo a second consecutive LET triumph – but there was some consolation: she rose to the top of the 2001 Evian order of merit and European money list and also of the latest Solheim Cup rankings.

In recent seasons, young Spanish golfers have also secured several international amateur titles, though not all see their future in the paid ranks.

Tania Elósegui, who is completing business studies at university, says she is not sure if she will one day become a professional, noting that only the top handful in Europe are able to make a reasonably comfortable living from the game.

Carmen Alonso expresses more enthusiasm for a professional career, though she highlights the need for a flag-bearer like tennis’s Arancha Sanchez Vicario to give the women’s game a higher profile in Spain.

Perhaps Spain now has that flag-bearer in Carriedo. “After my win there was a headline which said that Spain has another champion golfer, and their name isn’t García or Olazabal! Hopefully my win will make the Spanish public take women’s golf a little more seriously.”

A second win, in the Compaq Open in Stockholm, helped her cause – and the women’s game in general. In an interview with Spanish press supreme María Acacia Lopez Bachiller, Carriedo revealed that tour officials were giving indications that a women’s Spanish Open was likely for 2002. This has now been confirmed – two tournaments in fact – and they will be the first women’s European Tour events in Spain since the Spanish Open at La Manga in 1996.

Carriedo’s win in Sweden enabled her to consolidate her hold on first place in the LET order of merit and match rookie compatriot Paula Marti, also twice a winner on the 2001 European Tour and sixth in Stockholm. Carriedo said she was delighted that “someone as important as José María Aznar” had taken an interest in her performances: they played a round in May, and the golfing president is trying to arrange another outing when his schedule allows it.

But it all became even better for Carriedo, when she won the Waterford Crystal Ladies Irish Open to become the first Spaniard to finish atop the Ladies European Tour order of merit and first Spanish golfer since Severiano Ballesteos in 1991 to head any European order of merit.

Unfortunately, Carriedo was unable to take her excellent year-long form into the US LPGA Qualifying School. There is some surprise in Spanish golf circles that the 2001 European number one was required to qualify for the 2002 LPGA Tour, but it’s even worse than that: she also was required to go through the sectional pre-qualifier! That task was accomplished without too much trouble, before she came unstuck in the final qualifier in Florida last month. She finished 59th to miss gaining “non-exempt conditional status” – i.e. possible entry into the lesser events – by just one stroke.

More successful was best friend Ana Belén Sanchez. The 25-year-old from Málaga (26th in the 2001 LET order of merit and still seeking her first victory) failed by just three shots to gain a full exemption among the top 15, but secured conditional status.

It is inconceiveable that Carriedo will not receive several invitations to US tournaments this year, so the pair should be able to extend their European hotel room sharing arrangements across the Atlantic.

In the meantime, they also will be able to play a little more golf closer to home in 2002.

Severiano Ballesteros finished 204th on last year’s European order of merit – in his 28th season. It was the fifth consecutive year he had finished outside the top 100, and was his final year as a category one player (for having topped the 1991 order of merit – he also was number one in 1976, 1977, 1978, 1986 and 1988).
As an honorary member, and still a major attraction for any tournament sponsor, he will continue to compete this year, but many people are asking why.Towards the end of last year, while (perhaps ironically) conducting a clinic at San Roque, where he is redesigning the first course, having a house built and hoping to host this year’s Spanish Open (in fact, it went to the Canary Isles), Ballesteros explained what still motivated him.”I know what’s wrong. It’s very simple. I am bad physically with my back, and also my right shoulder. I think I hurt my back when I was 13, when I used to do boxing with my friends, and the shoulder may be from picking up my seven-year-old daughter. “But there are other things. As you get older you lose some strength, some flexibility…The desire to compete is not quite as great, it is harder to leave your home and family behind, to be dedicated, and concentration is more difficult, too.”The worst thing for me is not playing well. You don’t enjoy it. You know you can do it but, for whatever reason, it goes. I say to myself a lot after a bad round, ‘No more of this. No more.’ But this frustration, it only lasts a minute. Then I try again.”
Seve says he has achieved his biggest goal. “I wanted to get married, and have a family, and make sure they were healthy and received a good education. One of my sons may be a professional golfer, he is very good already, nine handicap, and the other one may be a soccer player. He wants to play for Real Madrid. They both play golf, and I make them go out with just one club. Maybe a seven-iron one day, or a nine-iron another. It is good for teaching imagination.”Imagination is one quality for which Seve has always been number one. Perhaps it will help him through another difficult season.
2 September, 2002Jose Luis Moya

This was the very first years of GolfinSpain.com and we managed to transmit live from Valderrama the event with a great success, including a collapse of two hours of one of our servers in USA. Obviously digital cameras at the time… were not what they are today so excuse the quality of the pictures. 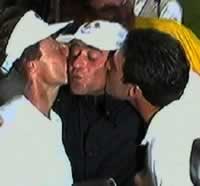 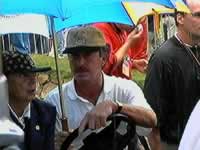 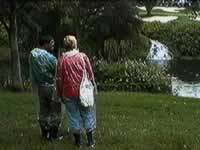 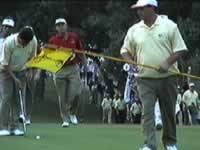 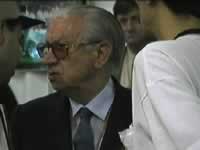